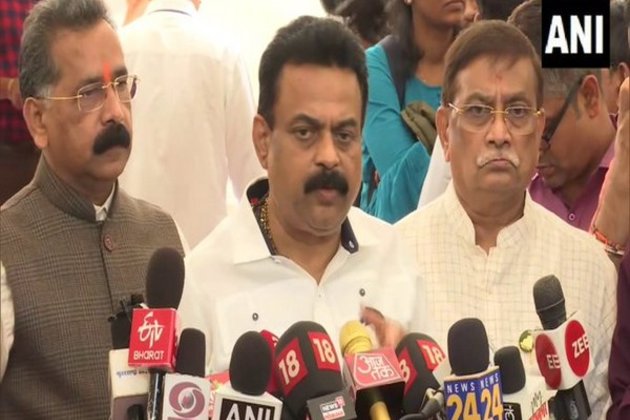 The Maharashtra Legislative Assembly today witnessed a row over whip between the two factions of Shiv Sena on the Speaker's election. Earlier, both Shiv Sena and the Eknath Shinde-led faction had issued different whips directing the MLAs to vote for their respective nominees.

Maharashtra Legislative Assembly Speaker Rahul Narvekar has taken on record the letter sent by Bharat Gogawale, who is Chief Whip of the Eknath Shinde-led faction.

The letter mentioned the violation of the whip by 16 MLAs of Shiv Sena. Earlier, Gogawale had issued a whip for the election of the Speaker of the State Legislative Assembly.

Now Sena chief Uddhav Thackeray has to get ready for long fight with rebel MLA Eknath Shinde to keep control of the Sena, its election symbol and even party offices, including the iconic Shiv Sena Bhavan. The battle between the two factions is likely to reach the Election Commission of India soon.

The Shinde faction, which has the strength of 39 MLAs, issued a letter on Thursday calling all Sena MLAs at the hotel in Goa, where the group is staying since Wednesday. Thackeray has 16 MLAs with him, including his son Aaditya.

In the latest development, the Uddhav Thackeray faction of Sena has also started the legal process to disqualify 16 MLAs, including Shinde.

Newly appointed Maharashtra Assembly Speaker Rahul Narvekar said in the House today that he has received a letter from Bharatshet Gogawale (whip of Shinde faction of Shiv Sena) that "16 MLAs have violated their whip and he has sought action. I have noted this.""Some defied Shiv Sena whip while voting in Speaker election. A complaint has been filed with the presiding officer. They could possibly be disqualified as a result. The matter of suspension of few members is still pending in Supreme Court," Shiv Sena chief whip (of Uddhav faction) Sunil Prabhu said to reporters today.

On objection raised by Shiv Sena (Uddhav Thackeray's Faction), Deputy Speaker Narhari Sitaram Zirwal said that he has received a letter from them and based on their request, he ordered to note down all votes of Shiv Sena rebels separately.

Meanwhile, the Supreme Court on Friday agreed to hear the plea of Shiv Sena chief whip Sunil Prabhu seeking suspension from the Assembly of Maharashtra Chief Minister Eknath Shinde and 15 rebel MLAs against whom disqualification pleas are pending, saying it was "fully conscious" of the issue on July 11.

A Vacation Bench comprising Justices Surya Kant and J.B. Pardiwala was urged by senior advocate Kapil Sibal, appearing for Mr. Prabhu, that the interim plea needed an urgent hearing due to the pendency of disqualification proceedings against 16 lawmakers, including the Chief Minister.

Eknath Shinde, while making his first address on the Floor of the Maharashtra Assembly as a Chief Minister on Sunday, said that the decision of Prime Minister Narendra Modi and Union Home Minister Amit Shah to let him lead the government despite having more members than his side has "opened the eyes of many". He also said that after the collapse of the Maha Vikas Aghadi (MVA) government in the state, a "BJP-Shiv Sena government" has taken charge which is based on the beliefs of party founder Balasaheb Thackeray.

The remarks of the Chief Minister came soon after BJP candidate Rahul Narwekar was elected as the Speaker of the House with 164 votes in support and 107 against him.

The post of the Speaker went vacant in the Assembly after Congress' Nana Patole resigned from the office in February 2021, to take guard as the party's state unit chief. In the absence of a Speaker, Deputy Speaker Narhari Zirwal was playing the part of an acting Speaker in the House. (ANI)