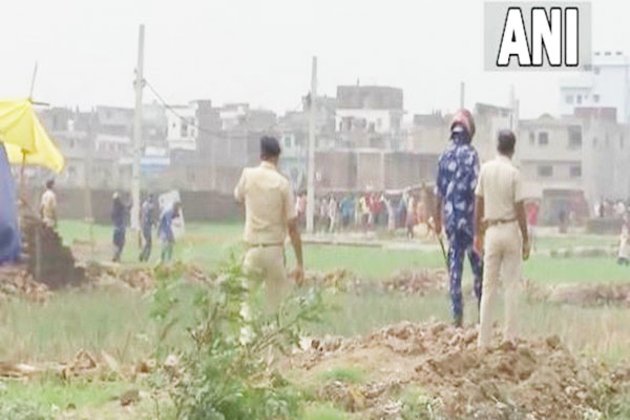 Patna (Bihar) [India], July 3 (ANI): A clash ensued between Bihar police and locals during an anti-encroachment drive at Nepali Colony of Rajeev Nagar in Patna.

Dozens of bulldozers have been installed at the spot for the drive. When the illegal constructions were being razed in Rajeev Nagar, the locals started pelting stones at the police team.

Speaking to ANI, Patna District Magistrate (DM) Chandrashekhar Singh said, "We had identified 40 acres of area and came today for an anti-encroachment drive. Locals collected and scattered pelting stones. Some policemen and City SP city were injured. The area is now in control. The process will continue till the zone is encroachment free."According to the police, one and half months ago, a notice was issued to remove almost 90 illegal houses in Rajeev Nagar.

Even after issuing notice, people living in the area protested by blocking roads, the police informed.

The police further said there are 5000 residents who have been living in the area in which only 90 applications were received of whom only 9 are accepted as many of them have no paperwork.

"While 5000 residents live here, only 90 applications were received of whom only 9 were accepted. No one has any paperwork. Land mafia is involved as this is prime land. We've advertised no sale/buying of this land is permitted, however, parallel sales are going on," he added.

"We have issued notice thrice, if they are saying notice hasn't been issued it is false. We will acquire 40 acres of land and will take strict action against whoever will interfere in this matter. We have arrested dozens of people who were pelting stones today," Singh said. (ANI)