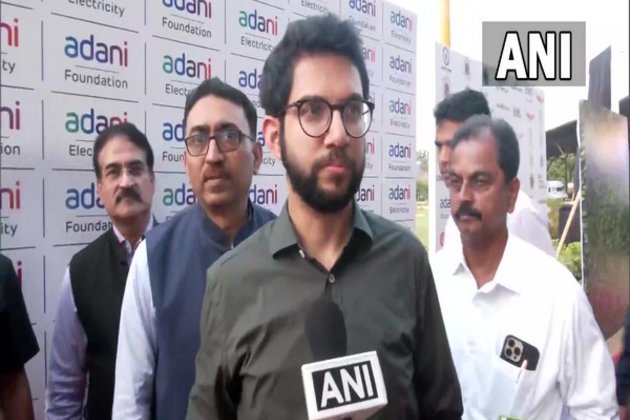 Aditya Thackeray tweeted, "Since I have to attend the sitting of the State Legislative Assembly today, I will be missing out on the protest for Aarey Forest and the MMRCL land. I humbly urge the new government to reconsider its decision. Don't cast the hate for us, on to our beloved Mumbai."His tweet came in the wake of environmentalists and opposition voicing concerns over the Metro-3 car shed project, which the new Eknath Shinde-led government in Maharashtra has proposed to move back to Mumbai's Aarey forest.

The Aarey forest is a 1,800-acre area which is often termed the city's 'green lung'.

"Aarey isn't only about 2700 trees, it is about it's biodiversity that we are seeking to protect in our Mumbai. There are daily sightings of leopards and other smaller species in the car shed spot and around it. We're proud of declaring more than 800 acres as the forest around it," added the former Maharashtra Minister in another tweet.

Further sharing concerns over the Aarey forest project, he said, "While the car shed work was given a stay by the then CM, Uddhav Thackeray ji, the work on the Line 3 was fully supported to be carried on. The alternate location of Kanjurmarg, disputed by GoI, will fit in depots for metro lines 3,4,6,14 into 1 space, thus saving on cost and time. Line 6 would anyway need a car shed, either at Kanjurmarg (which was originally thought of in 2018) or at Pahadi Goregaon. Having studied both, both are feasible for Line 3 too. Metros don't go to car shed after every trip, they need stabilising lines, that are missing for Line 3."According to Aaditya Thackeray, the 'badly planned project will destroy Mumbai's Aarey forest'.

Maharashtra Navnirman Sena chief Raj Thackeray's son and MNS president Amit Thackeray slammed the Shinde-Fadnavis camp for the decision and said that he was shocked by the decision.

"The new decision by the new government is shocking for me and innumerable environment activists and lovers. The youth of the state had earlier struggled hard against the move. Some were even put in jail," said Thackeray in a social media post.

He also highlighted that development is the need of the hour but not at the cost of the environment.

He also requested the state government to reconsider its decision.

In September 2019, then Maharashtra Chief Minister Devendra Fadnavis had said that the government is bound to cut trees in Mumbai's Aarey forest area as "development is important".

Mumbai Metro Rail Corporation announced its plan to cut down over 2,700 trees from the Aarey colony in order to build a car shed for the Metro. The colony, spread over 13,000 hectares, is home to over 27 Adivasi villages and inhabits various animal species.

The Bombay High Court in September 2019, verbally directed the Mumbai Metro Rail Corporation Limited (MMRCL) and the state government not to cut any trees in the Aarey forest area for the construction of a metro car shed, to which they agreed.

Later in October 2019, the Bombay High Court had dismissed all petitions against the proposed cutting down of over 2,500 trees in Aarey Colony of Mumbai to make way for a Metro car shed.

However, the Maharashtra government had stayed the order for the Aarey metro car shed project following massive public agitation in the city.

In 2020, the then Maharashtra Chief Minister Uddhav Thackeray announced that the state government had withdrawn cases registered against people who were protesting against the proposed metro car shed in Aarey.

He had said the proposed car shed has been shifted from Aarey to Kanjur Marg. (ANI)