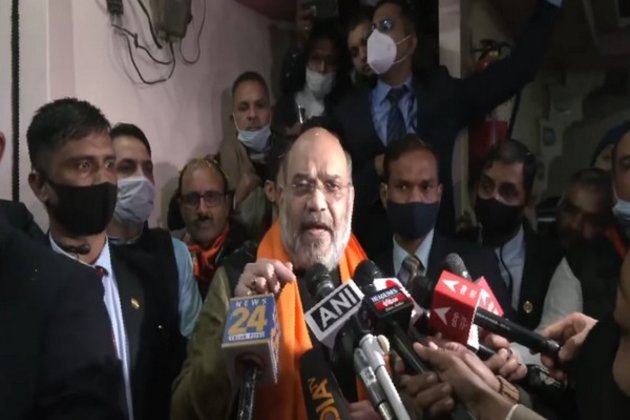 Kairana (Uttar Pradesh) [India], January 22 (ANI): In his address at his first political programme in Uttar Pradesh's Kairana on Saturday, Union Home Minister Amit Shah said that people who had migrated from the city under the 'misgovernance' of Samajwadi Party told him that Chief Minister Yogi Adityanath has improved the law-and-order situation here.

"If UP has to be developed then BJP government has to be formed once again with an overwhelming majority, under the leadership of CM Yogi Adityanath," Shah told media persons in Kairana city of Shamli district in Uttar Pradesh today.

The Home Minister said, "When I met people who had migrated from Kairana under the misgovernance of SP, they told me that Yogi ji has improved the law and order situation. Today those who made us flee have themselves migrated."He was seen distributing pamphlets to the crowd who chanted 'Jai Sri Ram' slogans in the city.

The senior BJP leader also said that a new wave of development can also be seen across the state.

"Several roads, airports, electricity, Covid-19 vaccine and many other facilities have been given to the people of UP by Narendra Modi and Yogi governments. Every poor household now has a gas connection, toilets, electricity, Ayushman Bharat Yojana card, free vaccines and free ration during the Corona pandemic. UP will become the most developed state in the coming days" Shah said.

The BJP has fielded Mriganka Singh, daughter of late Hukum Singh who had won polls from the seat several times from Kairana.

Elections to the 403 assembly constituencies in Uttar Pradesh will be held in seven phases starting February 10.