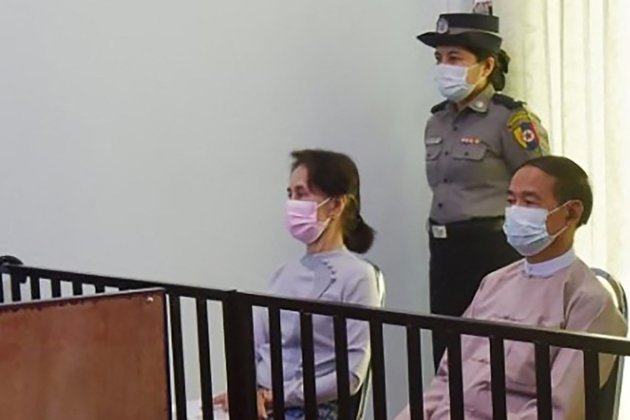 A Myanmar court on Monday found Suu Kyi guilty of inciting dissent and breaching COVID-19 rules after she was detained in a February 1 military coup amid unfounded charges of voting fraud in the wake of 2020 elections, in which her National League for Democracy (NLD) party had retained power. The Zabuthiri Court in Naypyidaw sentenced her to four years in jail, then hours later the military reduced the sentence to two years.

Protesters march through the streets during an anti-government demonstration in Mandalay, Myanmar on Dec. 7, 2021.

Myint, the former president and NLD party ally, also received a four-year sentence that was reduced to two.

After the sentences were handed down, the Security Council released a statement condemning the verdicts and calling for a democratic transition in Myanmar, which is also known as Burma.

Members of the council "reiterated their calls for the release of all those who have been arbitrarily detained since 1 February 2021," according to the statement.

The Security Council expressed ongoing support for democratic institutions and processes in Myanmar, and it directed the parties in power to avoid violence, "pursue constructive dialogue and reconciliation in accordance with the will and interests of the people of Myanmar, fully respect human rights and fundamental freedoms and uphold the rule of law."

The incitement charges against Suu Kyi were related to a letter the NLD had sent to embassies in Myanmar urging them not to recognize the military's rule after the February coup, according to Reuters. The second charge against her was connected to alleged breaches of COVID-19 protocols during last year's election campaign.

Suu Kyi and Myint denied the charges against them prior to sentencing. The court ruled that Suu Kyi's incitement charges presented a violation of section 505 (B) of Myanmar's Penal Code and said she had violated the Natural Disaster Law for her COVID-19 protocol breach, according to VOA reporting.

In the February 1 coup, Myanmar's military deposed Suu Kyi and her democratically elected government over unsubstantiated charges of electoral fraud. The military State Administrative Council has since charged her with a dozen criminal charges, such as corruption and violating Myanmar's secrets act.

In total, Suu Kyi's charges carry a maximum of 100 years in jail.