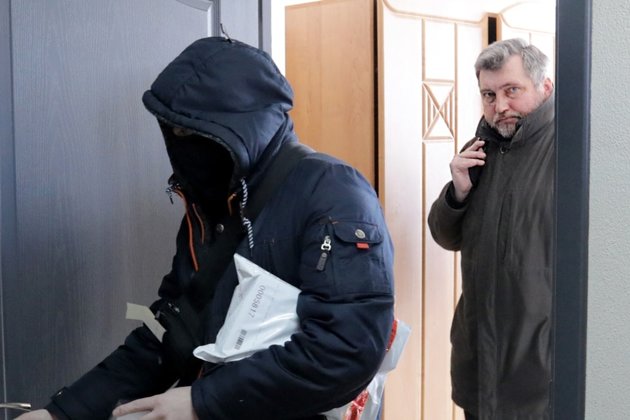 Belarus's Justice Ministry is seeking to close the country's leading journalists' association amid an intensifying crackdown on media and civil society.

The Justice Ministry on July 21 asked the Supreme Court to close the Belarusian Association of Journalists (BAZh) for 'repeated violations of the law.'

The move comes after authorities on July 20 froze all BAZh bank accounts following police raids on their offices last week.

'It is obvious that this is a brutal reprisal campaign against the organization,' BAZh Deputy Chairman Barys Haretski said, adding that they will fight to maintain the association's legal status.

The Justice Ministry alleges the BAZh failed to comply with requirements to submit certain documents, mostly related to lease agreements at some of the association's offices. The BAZh said it was given only a few days to submit the documents but couldn't respond to the ministry because their offices had been sealed off following the police raids.

The association was founded 25 years ago and has 1,300 members. It is the largest media association in Belarus, and a member of the International Federation of Journalists.

The bid to shut the BAZh down comes as the Belarusian authorities have ramped up their campaign against independent media.

Read our coverage as Belarusians continue to demand the resignation of Alyaksandr Lukashenka amid a brutal crackdown on protesters. The West refuses to recognize him as the country's legitimate leader after an August 9 election considered fraudulent.

The BAZh said that in recent weeks the authorities had conducted 66 searches at media offices and journalists' homes, while 32 journalists are in custody either awaiting trial or serving prison sentences.

Earlier this week, the authorities also froze the bank accounts of the Belarusian PEN Center, an association of writers led by Svetlana Alexievich, a Nobel Prize laureate for literature and member of the Coordination Council of the Belarusian opposition.

The authorities have also relentlessly pursued nongovernmental and human rights groups, including raids this month against a top human rights watchdog, Vyasna, and the Belarusian Helsinki Committee.

The sweeping actions suggest that authoritarian ruler Alyaksandr Lukashenka intends to further ramp up his crackdown on dissent, after the country was rocked by protests following an August 2020 presidential election that gave him a disputed sixth term in office.

The opposition and West say the election was won by Svyatlana Tsikhanouskaya, who is in Washington this week for meetings with Biden administration officials and U.S. lawmakers to drum up support for the pro-democracy movement.

SEE ALSO: Tsikhanouskaya Asks U.S. To Be A Guarantor Of Belarus's Independence

'We had talks with U.S. Secretary of State Antony Blinken and discussed how important it is to support Belarusian journalists and human rights activists now,' Tsikhanouskaya said in a video statement. 'The people of Belarus expect a resolute U.S. action. The stronger the measures to pressure the regime will be, the faster they will achieve their goal.'

Lukashenka has responded to the challenge to his rule by jailing thousands of people and forcing most opposition leaders who haven't been imprisoned to leave the country.

The West, which has refused to recognize the official results of the vote and does not consider Lukashenka to be the country's legitimate leader, has imposed several rounds of sanctions against the regime.

With reporting by AP and RFE/RL's Belarus Service